The 9 Best Places for a Bloody Mary in Utah! 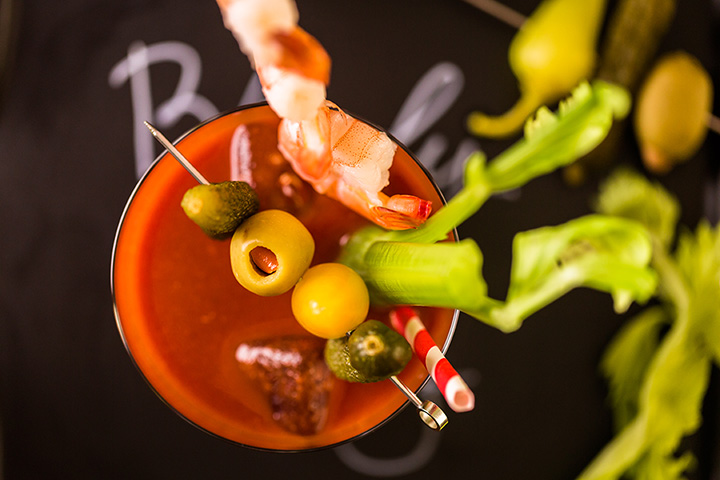 Bloody Marys are one of the most dynamic cocktails. They are an experience characterized by diverse, interesting (and sometimes bitter!) flavors. Whether you’re sipping on it for brunch garnished with a piece of bacon or you’re drinking one with friends at the bar on the weekend, you’ll find a delicious option at these 9 best places for a Bloody Mary in Utah.

Café Niche is a relatively new Salt Lake City establishment, but over the course of its few years on the city’s food and drink scene, the restaurant has developed a reputation for its welcoming atmosphere, and fresh, locally-driven food. Most all items on the café’s brunch and breakfast menus are best accompanied by an alcoholic beverage from the drinks menu, and if you like the Bloody Mary, you’re in for a treat. Café Niche’s Bloody Mary tastes incredibly fresh, which makes sense given the fact that their “bloody mix” features unconventional, secret ingredients that amplify the drink’s power to refresh.

With its glamorous interior, Finca could be Utah’s most Instagram-worthy restaurant. But the restaurant’s sultry, European vibes are not the only remarkable part of the restaurant. In fact, it would be hard to name one thing that Finca does more spectacularly than it does other things. From its mixed drinks and tapas to Sunday brunch—there is no way you will leave this restaurant without a desperate itch to return. Unsurprisingly, its Bloody Mary has a unique Spanish flavor, partly due to the restaurant’s homemade hot sauce, prepared with traditional Spanish ingredients. The Bloody Mary is just as smoky and sultry as the restaurant itself.

Piper Down aims to give customers a true “old world” pub experience, which, in their case, means creative drinks in addition to classic concoctions, all with the backdrop of a transplanted Irish pub. With multiple Bloody Mary cocktails on its menu, the pub is an opportune place to try an assortment of the savory drink.

Tin Angel Café doesn’t want to focus exclusively on one European inspiration. Its dishes are interesting mixes of a variety of international cuisines, including Spanish, Italian, French, and Moroccan. And while it’s easy to be skeptical of bold culinary fusions, Tin Angel Café does a supreme job of combining complimentary flavors. On Saturday, you can visit the restaurant for its “Champagne and Bloody Mary Brunch,” which combines a Bloody Mary inspired dish with one to drink.

You can only get the beloved Avenues Proper Bloody Mary during the restaurant’s Sunday brunch, whose menu features (in addition to a 13-inredient, $3 Bloody Mary) raspberry fritters, roasted tomato tartine, and “sweet potato benedict,” amongst other menu items, all of which are as delectable as you’d expect from one of Salt Lake City’s most popular dining hubs.

With three locations (Salt Lake City, Ogden, and Holladay), it would be an understatement to say that Pig & a Jelly Jar is merely popular, because the restaurant is wildly popular, and for good reason. The restaurant specializes in all things brunch and lunch, both of which are served all day, much to the delight of the restaurant’s loyal customer base. Rather than serve up a traditional Bloody Mary, Pig & a Jelly Jar mixes up what it calls a “Lagered Mary,” which is a “beer cocktail” featuring a Cajun sea salt rim, a house-made Bloody Mary Mix, Unita Lime Pilsner, lime, and pickled green bean.

Located on Park City’s Historic Main Street, Tupelo is one of the ski town’s most popular brunch spots, which can be partly attributed to its unique approach to the Bloody Mary. At Tupelo, the Bloody Mary is almost completely DIY. Customers are served a plain glass of tomato juice and vodka, and are then led to a very gourmet Bloody Mary bar, where they can customize their own Sunday morning pick-me-up.

Twigs Bistro & Martini Bar has a dozen or so locations in the Western United States, two of which are in Utah. The restaurant is famous for its “Hail Mary” Bloody Mary, which contains pepper vodka, asparagus, a blue cheese olive, and of course, a house-made Bloody Mary mix.

Jeremiah’s Restaurant is one of those places that has been around for so long, even as the restaurant landscape changes around them. But that’s the thing—Jeremiah’s doesn’t have to change, because people in Northern Utah believe it’s perfect just the way it is. The same could be said for Jeremiah’s “Bacon Bloody Mary.” With bacon, cucumber, pickle, olives, and celery, it is more or less the perfect, classic Bloody Mary that doesn’t need to be tampered with.